After the terrorist attack of August 2017, a controversy over the use of obstacles in the public space was unleashed in different media with the aim of trying to find solutions to those attack and in order:

1.- To difficults attacks with cars in very busy spaces
2.- To increase the safety of pedestrians

They were shuffling solutions of concrete barriers, large flowerpots …. On the eve of the Christmas holidays, the City of Barcelona, has tightened security in several areas of the city, including Las Ramblas, scene of the August attack.

New bollards on the Ramblas

Forest of flowerpots in the Portal del Ángel Avenue

This avenue is a commercial axis and for this reason the design of the placement of the flowerpots must allow the entrance and exit of the transport that carries out loading and unloading of goods at certain times.

In this large public space appear too large flowerpots that, as in the previous case, should allow movement of trucks and vans (it is one of the entrances to the Avenida del Portal del Angel). 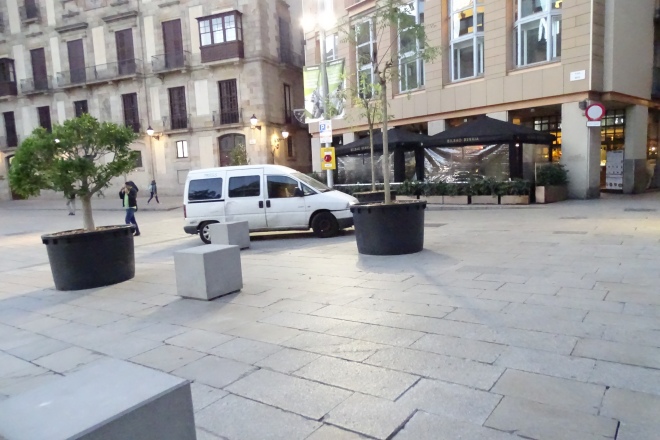 In any case, these solutions are welcome as they fit with the urban design logic of the city, but considering that the ways and forms of terrorist actions are chameleonic, and adapted to the conditions of the environment.